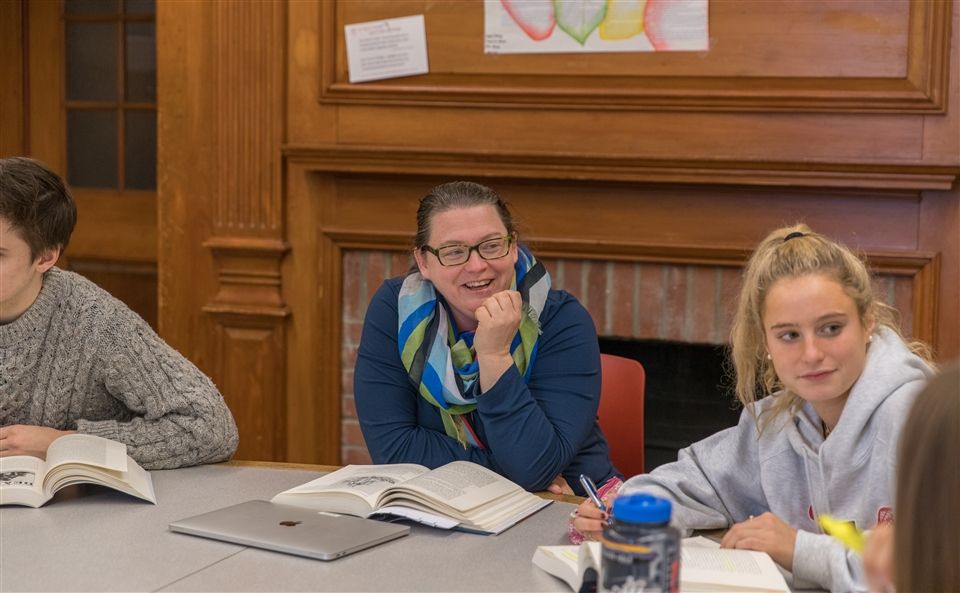 1/28/2019
Tenley Rooney
New elective takes the long view on media integrity in the fake news era
Growing up, watching the news was part of Sixth Former Ellie Ferraro’s daily routine. “When I was in middle school at home, I’d be eating breakfast and every morning I’d be watching CBS News,” remembers Ferraro. As she got older, the ways she accessed news began to change. The advent of social media platforms such as Facebook and Snapchat provided aggregated news coverage rather than the traditional broadcast. As a result, Ferraro began to question journalism’s function. How and why were newsmakers being covered and portrayed?
In the era of fake news, formmate James Orne has also found himself questioning the role of the media. “In today’s climate, can we really trust the media?” says Orne. “Can we trust everything or should it be taken with a grain of salt?”
Enter the History of Journalism elective, a course developed by Head of the Humanities Department Melissa Poole in the wake of the 2016 presidential election. The syllabus brings students through a historical reckoning of journalism in America, from the 1700s to now, and looks at its grounding principles and how they are used to navigate coverage. “There was so much debate and misinformation about the role of the press in the last election. I wanted to figure out if there was a way we could explore the history and purpose of the press during the founding of the United States, and then talk about the role of technology, and fake news today,” says Poole.
By the end of Winter Term, the classroom will morph into a newsroom with the students putting the principles and ethics they’ve learned into practice and tackling some of the big issues posed by today’s media landscape. “What are the rules governing the press? (Teens) interact with so much media all the time. They have a different concept of what news is than I do. They have a lot of questions about the difference between journalism with ethical boundaries and specific sets of skills and what they read on blogs and what we call citizen journalism,” adds Poole.
Lura Sanborn, a research and instruction librarian in Ohrstrom Library, is embedded in the class. She serves not only as a resource to help access primary sources, but to enhance scholarly discussion on the importance of these documents. “Many voices have come before us,” says Sanborn. “Why do they matter? How do they contribute to these conversations? Where is all of that content and where does it live online? To hold history in one’s hands brings a different experience,” she says. “It’s important for secondary sources to provide context. Not everything is searchable on Google.”
As students read America: A Narrative History of a Nation’s Journalism, the core text for the course, they’ve come to realize that some mechanisms that are decried today were also an area of contention centuries before. The use of salacious details to sell papers, or attract views and gain clicks, has been part of American journalism since its inception. “People should take this class so they can understand the journalism industry themselves, and how to read the news,” says Orne.
“To look at St. Paul’s overall, this type of course exemplifies what St. Paul’s gives to us,” says Ferraro. “It’s not just a journalism course where we look at the issues of journalism and what we face today. It’s going to dive into the past and expect us as students to connect the issues of the past to now, and go on a broader spectrum and see how journalism has evolved and how it affects us.”