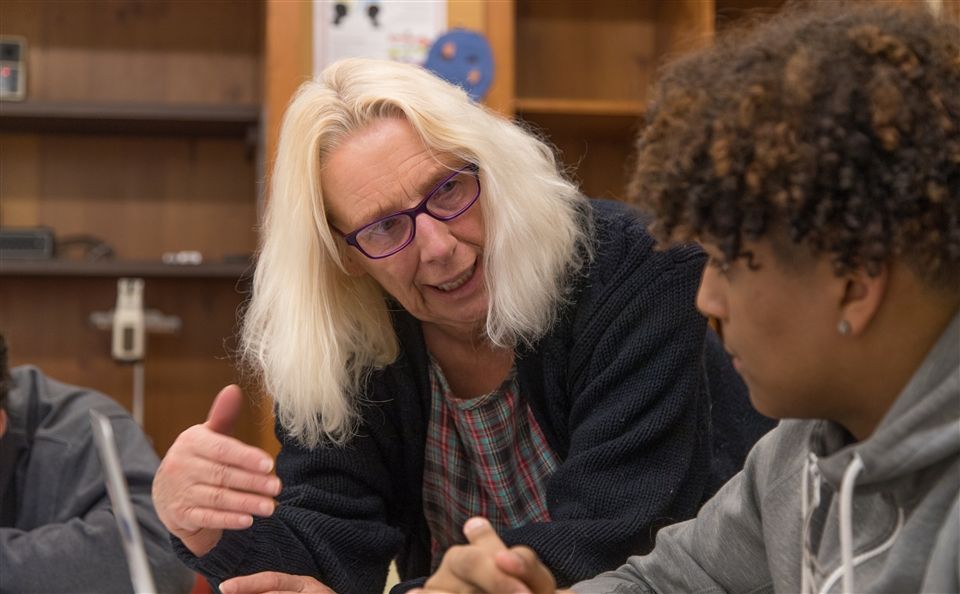 2/22/2019
Tenley Rooney
Anny Jones champions the student voice
As students settle into their seats in Schoolhouse room 227 for the Creative Writing elective, their chatter is hushed as their instructor Anny Jones utters her familiar, “babble, babble.” With this call to action, students open their laptops and free write for five to 10 minutes on any thought or topic that comes to mind. This entry into the academic block is a trademark of Jones’s class structure.
Jones is never without a pair of bold colored spectacles or a decorative bauble that exudes her expressive nature. When not offering "babble time" in class, Jones is known for her love of a good natter, a British term synonymous with casual banter. A native of Kent, England, Jones earned a degree in English at the University of York and taught English at three schools in Britain before joining the faculty at St. Paul’s School with the encouragement of faculty emeritus George Carlisle 25 years ago.
Jones takes a free-form approach to the course, and it’s one her pupils find liberating. “I make it very fluid,” says Jones, who holds the Form of 1944 Endowed Chair in Humanities. She strives to release her young writers from the confines of analytical thought and lead them to the discovery of their voice. “There is no online syllabus. They have no idea what is coming.”
By the end of the course, students will have produced a minimum of 24 polished pages for their class portfolios. The number is intimidating, but the process, says Sixth Former Aaron Magloire, is redeeming. “Ms. Jones creates a welcoming atmosphere where experimentation is encouraged,” he says. “She doesn't want us to get too hung up over pieces we deem bad; she wants us to realize that everything at first is a draft and that we can always return to and revise our pieces as needed.”
Jones doesn't just encourage creative thinking; she embodies it. She is active with local writers groups, championing not only their work but steadily progressing and reassessing her poetry and prose. Since arriving in Millville, Jones has taught the Creative Writing elective and earned an MFA from Pacific University in Oregon. In addition to teaching Humanities III and serving as the adviser to the Horae Scholasticae, the longtime art and literary magazine showcasing student work, Jones is a frequent lecturer at the nearby Kimball Jenkins School of Art, where she speaks on the intersection of art, literature, and history. Her talks delve into unique topics, such as "Laundry: The Agony & The Ecstasy," "A Short History of Hay," and "Mutability: Silk & Anxiety in Renaissance Art & Literature." She also heads the School’s Schlesinger Writer-in-Residence series, which brings professional writers and acclaimed artists to the School to share their talents with students and faculty alike.
The course attracts students from all facets of School life: athletes, Student Council members, math whizzes, but above all, curious minds. By the end of the term, the students and Jones are astounded by their transformations. “When you give them the chance to be creative, they realize they can write,” says Jones. “Everyone can find a voice. For some, it’s a genuine surprise.”
For Fifth Former Bisbee Scott, the challenge was daunting at first, but as the term has progressed, she has noticed a significant change in her writing. “The more you write, the more comfortable you become,” says Scott. “Writing for 10 minutes a day just keeps your mind moving.”
Jones stresses that creative expression is beneficial for everyone. “There are so many great writers who have had many other day jobs,” says Jones as she rattles off the “day jobs” of author Herman Melville (a customs agent among other things), poet T.S. Eliot (a banker), and poet William Carlos Williams (a doctor).
What Scott enjoys most about working with Jones is her approach. "She is very open about everything," says Scott. Her reading selections often skew to the abstract and draw a new depth of thinking from her students. "She peels apart things you would never have thought of," says Scott.