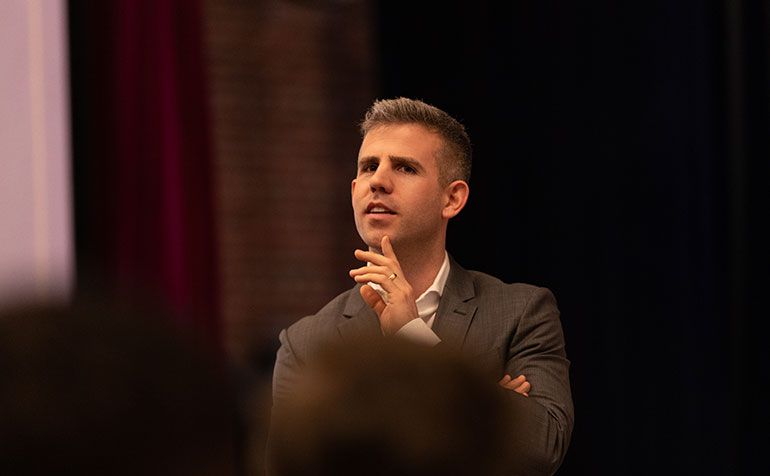 5/14/2019
Tenley Rooney
Kurt Crowley '02 brings Broadway to Millville
It’s not every day high school students have the opportunity to workshop with top Broadway talent, but on a Tuesday morning in May that's what members of the School’s a cappella groups did. A buzz filled Memorial Hall as Kurt Crowley ’02, the musical director for the hit show Hamilton, helped the T-Tones, Madhatters, and Deli Line singers learn to blend baritones and tenors, altos and sopranos into the layered signature of a capella performance.
On Crowley’s command, the 30 young vocalists lifted and lowered their tones in unison during a warmup exercise. He offered encouragement and tips for improvement. "Singing with a group of people is a unique experience," Crowley told the small but captivated audience. “Take advantage of it now.”
Nearly 20 years ago, Crowley was literally in their seats. To read his resume now, it might come as a surprise that the Cook Scholar from Helena, Montana, failed to make the cut for the T-Tones, the School’s all-male a cappella group, in his Third Form year. After forming a group with his fellow Manville House members, Crowley eventually triumphed was able to join the cohort.
Sam Hobbs ’19 felt a kindred spirit with the young alumnus. Hobbs was also cut from the T-Tones as an under former but has since risen to be head of the a cappella group, as well as Deli Line, the co-ed a cappella lineup, and is a member of the Chapel Choir. "It was amazing to meet someone who has been so successful coming out of the same program," says Hobbs. "He is an inspiration to many other students in the music program and me and at St. Paul's in general."
In the years since that first rebuff, Crowley has played at the White House with the Hamilton cast while serving as the show's associate music director. (He serves as the music director for the cultural phenomenon.) Currently, he's on set for the movie adaptation of In the Heights, the first break on Broadway, that coincidentally was also one of Hamilton creator Lin-Manuel Miranda's early creative efforts.
During a School-wide talk as part of the Conroy Visitors Series, Crowley encouraged students to seek out what inspires them and reminded them to consider, as Hamilton asks, “Who tells your story?” Crowley’s story began at the age of three when he started playing the piano. He could play Phantom of the Opera before he could reach the pedals, but it was under the tutelage of Bill Fletcher in the SPS Music Department that he learned musical theory. While Crowley worked diligently on his artistic development throughout his time at SPS, he pushed it to the periphery of his academic experience. When he arrived at Harvard to study religion and music, he followed the same pattern. After studying ancient music in India, Crowley realized the academic pursuit of music was not for him. Connecting with people and performing were his true passions.
“He said that coming to St. Paul's he got that determination to just never give up and to always persist and try new things and be the person who has that voice in the room and that sort of individuality,” said Adani Duguay-Webster ’20, one of the theatre students Crowley met with during his visit.
The last time Crowley visited Millville, he was working on the national tour of the Broadway musical In the Heights. The morning after the performance, Crowley ventured into Chapel before heading back on the road with the cast and crew. It was a significant moment: It marked his first time working with Miranda, who he also partnered with on Bring It On: The Musical, and he met his future husband, who was a dancer in the production. It’s been a whirlwind journey since that pit-stop in Concord nearly a decade ago, and one Crowley says he couldn’t have predicted.

“It was inspiring seeing and hearing the in-depth explanation of how he got there and the hurdles that he went through, and how he didn’t take a direct path into the musical theater world,” says Duguay-Webster. “He had to discover different parts of himself and learn about the different things he was interested in that eventually led to that.”
“That made me think I'm okay. If this is my prologue we haven't even gotten to the first and second act and the finale,” she said.
The Conroy Distinguished Visitors program was established to stimulate and inspire students in the School, to enlarge their view of life, and to suggest directions in which they can serve their country and their communities effectively. Through this program, outstanding leaders in various fields are invited to the School for discussions, meetings, School-wide performances, and lectures. Conroy Visitors have included poet/author Maya Angelou, cellist Yo Yo Ma, the Chicago Symphony Singers, and U.S. Poet Laureate Billy Collins among others.