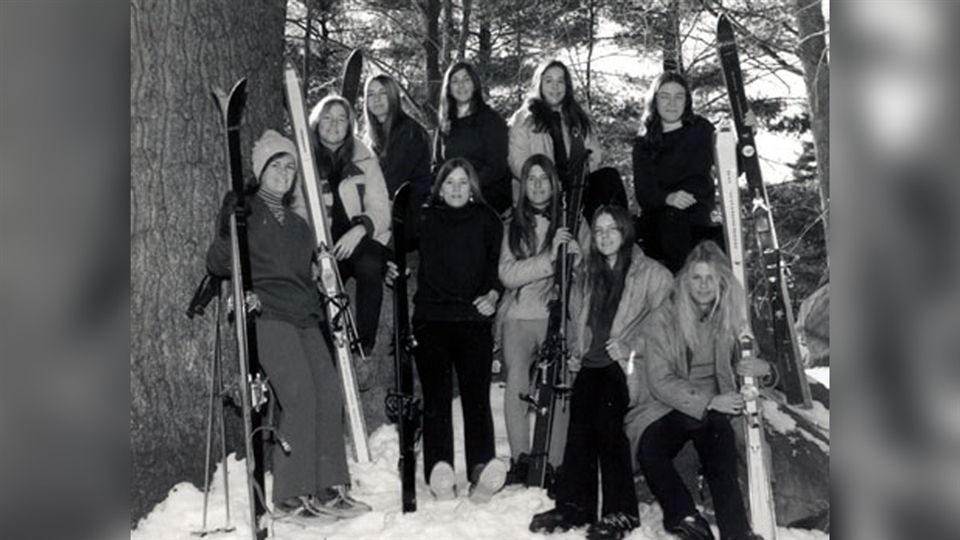 1/22/2021
Jeff Selesnick
Fifty years ago this month, St. Paul's School welcomed its first female students
It was 50 years ago this month that the first contingent of female students started their journey at St. Paul’s School. On a freezing cold winter morning, a cohort of 19 women, trailblazers for the more than 3,000 alumnae to follow, commenced the era of coeducation at SPS.

While girls had attended the School through student exchange programs and the Advanced Studies Program in years prior, the 19 girls that started classes on January 3, 1971, were the first to begin on the path towards an SPS diploma.

Roberta Tenney, one of the first female faculty members and coaches, wrote in 2016 about those early days: "Shortly after the trustee vote, I was hired to teach history and help usher in coeducation. While not always without challenge, the girls were welcomed by both students and faculty – as was I.”

While conversations about transitioning to a coeducational model had been happening for years prior, the infamous Sixth Form Letter proved to be a tipping point. The letter, penned and signed by members of the Sixth Form in the spring of 1968, forced the administration to confront a number of student grievances, including the absence of girls at the School. It was in the spring of 1970 that the board finally voted to accept female students.

“The first 19 girls were welcomed at SPS and we wanted to be there, but it was a leap of faith,” notes Julia Jordan Alexander ’72, a member of the original 19. “Concern was expressed that girls would prove a distraction and lower the School’s integrity and quality of education. We knew we had to prove our worth. It was exciting as well as terrifying. In this environment of unknowns, I learned my best response to a challenging situation is to stay present and just keep showing up. And, showing up as my best self.”

“In retrospect, it seems there was a pervading sense that girls would come in gently and quietly, dress nicely, smile warmly, and beautify the campus with their presence,” recalls Sally Keating ’72. “So, when girls were rebellious or challenged authority in the manner that boys did, it may have come as a surprise. At the same time, the atmosphere was exciting and stimulated inner growth and toughness in a way that I always will appreciate.”

The presence of female students has continued to shape the SPS community over the past five decades, and alumnae have continually come together to reflect on their experiences at the School. In 2016, a group of alumnae formed the SPS XIX Society, in honor of the first 19 women to attend the School. The group’s mission is to engage, connect, and enrich the lives of the School’s alumnae, and in the spring of 2019, more than 80 women participated in the SPS Women and Girls Summit. The two-day event provided space for participants to discuss their time at SPS, reflect on coeducation, and envision a future where women are as empowered as their male counterparts.

“Despite some challenges, I am glad I made the decision to attend SPS,” says Deb Sistare Holsapple ’72. “Having the opportunity to participate in making a significant change to the School was a key factor for me. Change can be difficult, but I have always found it has its rewards and usually provides some important lessons along the way. SPS definitely was one of those opportunities.”

The year 2021 marks the 50th anniversary of coeducation at St. Paul’s School and a community-wide celebration, honoring and recognizing the School's alumnae, is being planned for the Fall of 2021. “Coeducation is the single most consequential advancement our School achieved in the twentieth century,” notes Alumni Association President Will Dunn ’02. “I’m looking forward to recognizing both the trailblazing alumnae who first arrived in Millville as students and all the women who followed.”