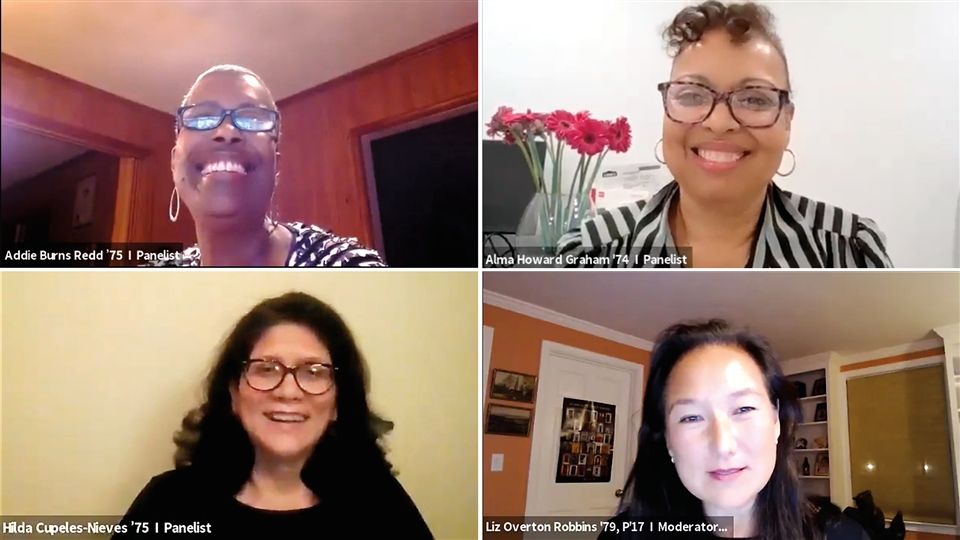 Lifting Each Other Up

11/24/2021
by Kristin Duisberg
Early Alumnae of Color event features storytelling, reminiscing, and insights
Be yourself. Find a mentor. Do an internship. Take advantage of everything that St. Paul’s — and your path from St. Paul’s — has to offer.
That was some of the advice Alma Howard Graham ’74, Addie Burns Redd ’75, and Hilda Cupeles-Nieves ’75 shared during a virtual panel event held on the evening of Nov. 9. Hosted by the SPS Alumni Association’s Alumni of Color Advisory Council and XIX Society and moderated by XIX Society Chair and Trustee Liz Robbins ’79, P’17, “An Evening with Early Alumnae of Color” featured lively storytelling as well as compelling insights for current students, several dozen of whom gathered in Sheldon for a watch party. As St. Paul’s School continues its yearlong observance of five decades of coeducation, the trio reflected on their time as some of the first African American and Latinx girls at the School and shared how SPS shaped their path and purpose.
All three of them, arriving in Millville from outside New England, recalled experiencing culture shock. “We couldn’t find any Black people,” Redd said of driving through Concord with her father in the fall of 1972. In contrast to her Brooklyn, New York, neighborhood, where she had lived with Black, Jewish, and Italian families, “… there were times that first year when it felt like everything was white: the toilet paper, the walls, the snow.” Cupeles-Nieves, who came from the Bronx, recounted struggling to find food in the dining hall that felt like home and getting in trouble for skipping Seated Meals. Graham, an ABC scholar from Memphis, Tennessee, spoke about being “terrified” that she’d be teased for her southern accent.
“But students from all walks and cultures helped me navigate my way at SPS,” Graham said, a sentiment echoed by Cupeles-Nieves, who described the support she received from faculty members and the friendships she formed “that were more like family and continue to this day.” Redd added that SPS helped her see many things from multiple perspectives — an exercise that was formative in her decision to change directions part way through college, leaving Wellesley after two years to pursue a nursing degree.
Now retired from a multi-decade nursing career, Redd recently realized a long-held dream of owning and operating a house for girls coming out of detention. Graham, who earned a law degree from the University of Southern California after graduating from Boston University, serves as senior associate general counsel for Anthem Healthcare. Cupeles-Nieves, also a BU alumna, spent her career at Lehman Brothers as a vice president in the tax and technology group.
Nearly 50 years removed from their SPS experience, all three panelists as well as moderator Robbins emphasized that it’s vital for girls and women to lift one another up when they can. “Don’t get caught up in competing with one another. You’re all there to be the best that you can be,” Redd said. “Join in with others who have likeminded dreams. Join in with those who have different ideas so that you can grow.”
Robbins concurred, closing the panel with the observation that the XIX Society was established to encourage SPS alumnae to support one another. “If you’re fortunate enough to be in a position where you can help other girls or women get a leg up,” she said, “reach out your hand.”

Hear more from Alma Howard Graham ’74, Addie Burns Redd ’75, and Hilda Cupeles-Nieves ’75. You can watch the full recording of “An Evening with Early Alumnae of Color” here.