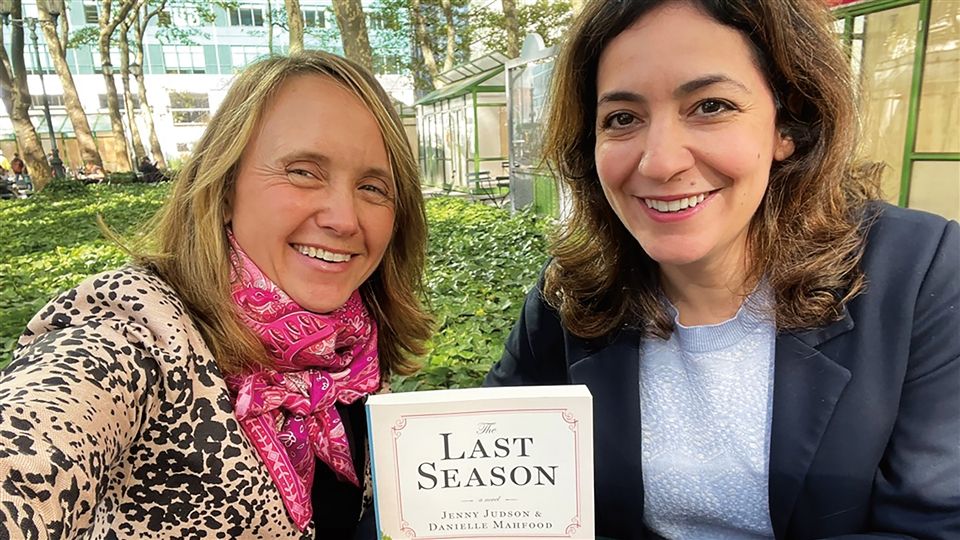 1/10/2022
by Jana F. Brown
With the release of their novel, Jenny Heath Judson ’94 and Danielle Faris Mahfood ’94 have realized a lifelong dream.
October marked the publication of The Last Season, a work of historical fiction co-written by Jenny Heath Judson ’94 and Danielle Faris Mahfood ’94. The longtime friends began their collaboration in a science class at St. Paul’s School in the early 1990s, where they “wrote short excerpts from imaginary novels that featured themselves and their classmates as characters caught up in tales of romance and adventure.” Their own story is one of friendship and perseverance. After more than 10 years of working together on The Last Season, Jenny, a high school English teacher, and Danielle, who works in financial services, discussed the book’s publication with Alumni Horae Editor Jana Brown.
Tell me about how you became friends at SPS?
Danielle: We met early in our Fourth Form year and spent a lot of time together both at school and on school vacations. In Fifth Form, we both signed up for Human Anatomy and Physiology with Dr. G [Theresa Gerardo-Gettens]. I remember one day when Jenny was already finished with the lab, so she decided to write a story for me. That one page started it all.
Jenny: For some reason, we both remember that well — it was a story that followed all the cheesy romance archetypes. It featured Danielle as a damsel in distress and somebody we all had a crush on, who rode across the beach on a stallion to save her. It was just a piece of paper, but that story made its way around. We were doing this pre-cell phone and social media, so only a handful of people saw it, which saved us some embarrassment; today, it might have gone viral.
How did that idea of writing a longer story evolve from there? And, when did you realize you were committed to writing a novel together?
Danielle: After SPS, we stayed in touch and the stories became a running joke. I would often have big birthday parties and Jenny started bringing me longer stories as presents.
Jenny: I’m an English teacher and have always dreamed of writing. This particular project was half dream, half joke. It was a funny thing to do, but even in the yearbook, I wrote to Danielle that I would dedicate my first novel to her. Danielle always said, ‘you should do that’ and then at some point it became ‘we are going to do this.’ Years later, we went to the movies on a rainy day in New York in 2009 to see The Young Victoria. As we came out of the movie, Danielle looked at me and said, ‘We are writing that book — now.’
Danielle: We walked to Barnes & Noble near Lincoln Square to check out the historical fiction section and were surprised that there were not more books set in the Victorian era. We both liked the time period and some of the classic novels from around then — Charles Dickens, Anthony Trollope. There was a lot of social movement going on at that time because of industrialization. The financial crisis of 2008 was fresh in our minds, and we were interested to find there was a financial crisis in the 1870s that closely mirrored what we had just experienced.
Tell me about your mutual interest in historical fiction and romance novels.
Jenny: In high school, romance novels were a way to escape and also a little forbidden. Some of it was the sexiness of a romance novel. The characters tend to have a happily-ever-after. When I’m looking for a pleasure read, even today, I look for something that will provide a positive boost.
Danielle: I’ve been a voracious reader my whole life. We always intended to write a beach read, something in the mass-market genre. But we also wanted it to be historical fiction because that transports you to a time period, which is what Jenny and I love.
What was your process in working together?
Jenny: Our process changed over time. We collaborated on the storyline and then divided and conquered on both the writing and the research. Once we had written most of the story and had the whole plot, we took different sections to edit and then would read our sections aloud. In doing so, we smoothed out the differences in our styles. The book would never have gotten done if Danielle wasn’t a project manager. She gave us a schedule and, in a way, I would say she believed in the project in a more concrete way than I did.
Danielle: We each have our strengths. Jenny has a beautiful ability to create the atmosphere of the scene. I was about driving the plot and dialogue forward.
Publishing a novel has been a longtime dream. How does it feel now that it is happening?
Danielle: I’m just thrilled. This has spanned at least a decade. This project has given me an escape from my day-to-day life and our friendship has gotten so much closer having this shared experience. I’m not sure I could have done this with anybody else but Jenny.
Jenny: This is what life is about — relationships. For us, it is really a story of friendship and a lesson about sticking to and chasing your dreams.
____________________________________
To learn more about Danielle, Jenny, and The Last Season, visit daniandjenny.com.