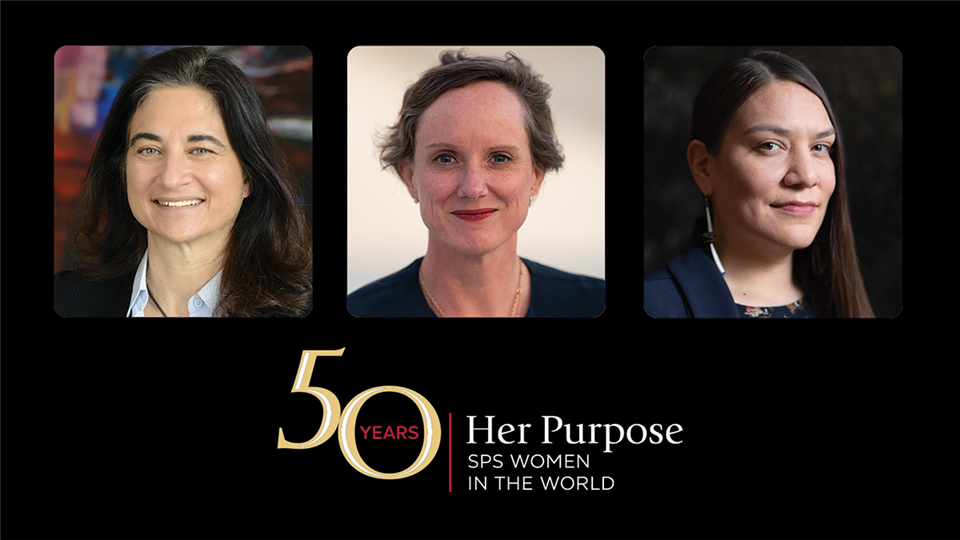 A Call to Climate Action

4/28/2022
Kristin Duisberg
April 19 event celebrating 50 years of coeducation inspires and informs on the subject of environmental stewardship.
For Grace Bulltail ’00, the realization came after she earned her doctorate in engineering and —having discovered her love for teaching — understood she didn’t want to work as a professional engineer. For Diana Propper de Callejon ’80, it happened when she was eight years old, immersed in the woods an hour north of New York City among trees that had no voice to represent them. Abigail Dillen ’90 says she never had a particular moment of clarity that led her to a career devoted to environmental stewardship, but instead a dawning realization, while living in Montana, that if she wanted to champion climate solutions, she would need to understand more about the energy industry — a field with few female professionals.

On April 19, these three alumnae were joined by St. Paul’s School Rector Kathy Giles and Katie Allen ’23, one of the heads of the student Eco-Action club, for the fourth installment in the School’s yearlong conversation about the paths taken by women graduates of SPS, “Her Purpose: Environmental Leadership.” The virtual discussion, one of the cornerstones of the School’s observation of Earth Week, showcased the many forms that particular sense of purpose can take — Bulltail is an assistant professor teaching environmental studies at the University of Wisconsin-Madison; Propper de Callejon a managing director for a holding company focused on impact investing; and Dillen the president of the nonprofit environmental law organization Earthjustice.
Rector Giles started off the conversation by outlining the extent to which today’s St. Paul’s School teachers and students are engaged with the issues of climate action and sustainability, pointing to the endowed chair in Environmental Stewardship held by Nick Babladelis and his work with the student Farm Team, Eco-Action and more. “This is a conversation we weren’t having when I was at SPS,” observed Dillen, who called it a “great privilege” to be involved with work aimed at protecting human health and the environment, not just now but for generations to come. Bulltail noted that she had had to work to find things that spoke to her experiences and concerns as an Indigenous woman and that she hadn’t always had the language to know what those things were. “I’m motivated by creating the work that I wish I had found as a student,” she said — not just at SPS, but in college and graduate school. Propper de Callejon shared that she was inspired to be a pioneer in her field of finance — that of moving capital to solve environmental and social problems on the world stage. “When I started, not a lot of people in business were focused on the environment,” she said. “But if I’m not inspired to climb at a 45- or 90-degree angle, I don’t think I’m doing the work.”

In a conversation that could have tilted toward despair — at one point, Dillen pointed out that the climate is just one dial on the planetary dashboard, and that there are additional crises humanity will face in the coming decades — all three panelists provided notes of hope.
Bulltail pointed to the effectiveness of grassroots efforts in tackling environment-adjacent issues, particularly for underrepresented communities. “I’m so inspired by the students, by the people on the ground,” she said.
Propper de Callejon similarly saw optimism in the fact that there are young people — like Allen, the evening’s co-host — ready to take up the mantle of environmental activism. “We need people like you to go out and turbo charge,” she said.
Dillen pointed to a confluence of factors that have come together to make the soil of social entrepreneurship good for harvesting, including the manner in which business is moving away from prioritizing shareholders and toward emphasizing social issues and consumer preferences. “People want to know where their products come from, what’s in the food they eat …. That’s different from when I was at school,” she said. “There’s a groundswell around the smartest people, the most innovative and creative, taking jobs with purpose and meaning.”
As with previous events, the evening concluded with each panelist sharing a piece of advice for her SPS self. Bulltail said she would tell herself to take her time with her education, and trust that the rigor of SPS would prepare her. Dillen’s advice included not waiting for anyone else to tell you that you’re doing the right thing. Propper de Callejon noted that the advice she’d give herself is the advice she gives her own children: Live from a place of love and kindness; live with a mindset of abundance not scarcity; make sure you are being generous and helping others succeed.
Two more events remain in the School’s celebration of coeducation — a virtual panel focused on the arts on May 11 and a culminating event during Anniversary Weekend on Saturday, June 11. More information will be shared soon.