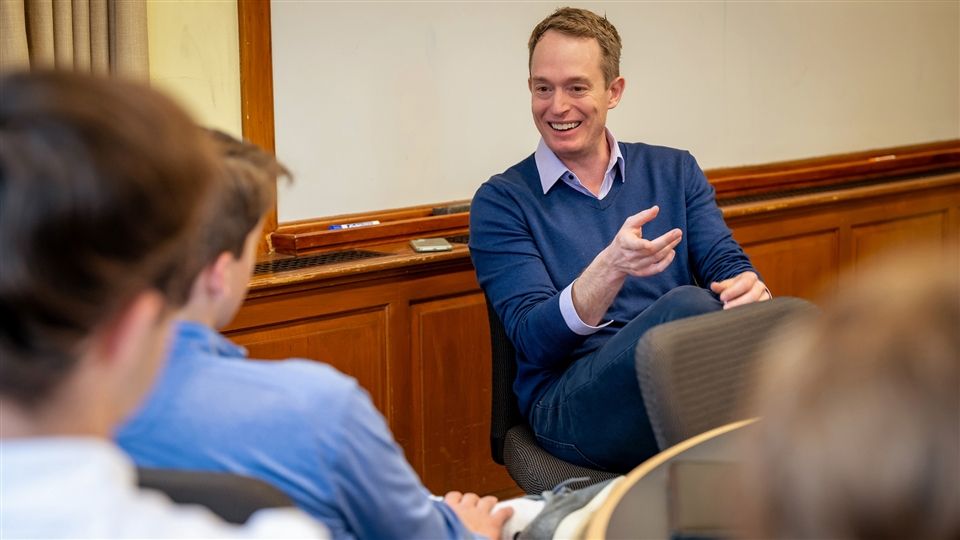 5/3/2022
by Kate Dunlop
Author finds enthusiastic audiences for discussions of history, memory and writing
Jonathan Brunstedt, assistant professor at College of Liberal Arts at Texas A&M University and author of “The Soviet Myth of World War II: Patriotic Memory and the Russian Question in the USSR,” spent two days with the St. Paul’s School community in Chapel, classes and evening discussions as the 2022 Schlesinger Writer-in-Residence.
Brunstedt’s research centers on nationalism and cultural memory in the Soviet Union and wider world, with a particular emphasis on the representation and commemoration of war. In his Chapel talk on Thursday, April 7, he explored the difference between history and historical memory and how to recognize the difference in order to better understand international upheaval. Our sense of history, he said, is often shaped by pop culture’s black-and-white presentations of forces that we come to know as good or bad — consider how “Braveheart” and “Saving Private Ryan” have affected how we think about Scottish history and D-Day — but the study of history reveals complexities of the past that are very different from our sense of the past.
Elizabeth Painter ’22 found his Chapel remarks compelling and enjoyable. “It was fascinating to hear Brunstedt’s perspective on Russian history and people from his childhood memory of Cold War propaganda in juxtaposition to the cultural history of Russia,” she said. “Perhaps most important, [he] reminded us to embrace our humanities education to overcome cultural barriers and biases, seeking the historical truth behind the media titles splashed across our phone screens.”
In Teacher of Humanities Christine Carter’s American Foreign Policy class, Wade Bednar ’22 found Brunstedt’s in-depth discussion about the ongoing conflict in Ukraine clarifying and enlightening. “I thought he did an excellent job of addressing common misconceptions about Vladimir Putin’s intentions in the region,” he said.
Brunstedt’s visit was especially meaningful to Sixth Former Lindsay Martin, who plans to study history and German in college with a research-focused study of central and eastern European studies. After hearing him speak in Carter’s class and that evening’s standing-room only talk, “History and Memory: Knowing the Difference and Why it Matters,” Martin asked to sit in on Teacher of Humanities Matt Soule’s World War II class the next day and also attended Brundstedt’s second evening discussion, “Keeping it Simple: Why Anyone Can Write a Book.”
“Many students at St. Paul’s go on to study international relations, political science and the like, but I have not found many who plan on studying history,” said Martin. “Talking one-on-one with a historian who is passionate about ... the same areas of study that I am was a gift.”
Aspiring writer Jackie Chen ’22 also attended Brunstedt’s writing lecture and found the knowledge she gained about tackling a novel and the publishing process valuable.
“Of all the talks I’ve attended at SPS, this one has been the most impactful for me,” she said. “It has motivated me to start writing for fun again after a long hiatus. Also, I had the wonderful opportunity to chat with Professor Brunstedt afterwards about historical fiction and was delighted to receive some book recommendations!”
The Schlesinger Writer-in-Residence Program
The Schlesinger Writer-in-Residence Program was established by Richard and Sheila Schlesinger in memory of their son, John-Christophe ’92, who died at age 23 in an August 1997 car accident soon after earning his master’s degree from Stanford. A passionate reader and writer, Schlesinger was looking forward to launching a career in journalism and was set to start work as a freelance newspaper writer.
The program invites professional writers in a variety of genres to visit the School and meet with classes, conduct writing workshops, offer public readings and lectures, and meet informally with students and faculty to generate and foster enthusiasm for creative writing.
Previous speakers include Pulitzer Prize-winning author Eliza Griswold ’91, U.S. Poet Laureate Donald Hall, screenwriter Jamie Vanderbilt ’94, and authors Lorene Cary ’74 and Janice Lee ’90.