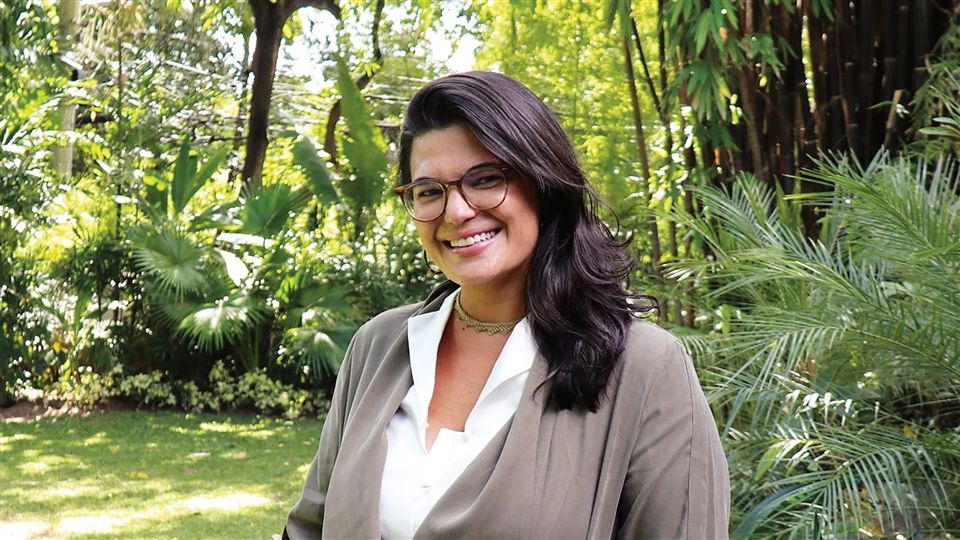 7/11/2022
by Ian Aldrich
Mariana Zobel de Ayala ’06 is stepping up to help lead her family’s business and make a difference in the Philippines.
In the Filipino business world, the Ayala Corporation needs no introduction. Founded as a distillery in 1834, the family-owned conglomerate is now the largest corporation in the country, with business interests in retail, real estate, banking, telecommunications, healthcare, renewable energy, and more.
Mariana Zobel de Ayala ’06, whose father served as CEO of Ayala Corp. for many years, has long had a front-row seat to the conglomerate’s growth and diversification. Now, as VP and deputy head of marketing at Bank of the Philippine Islands, she is one of several eighth-generation family members who’ve been carefully prepped to help steer the corporation deep into the 21st century.
“There was pretty deliberate exposure,” she told Bloomberg News last year. “The generation above us, gen seven, really looked to try and understand through this exposure ... where our personal interests and strengths aligned with what the business needed.”
Alumni Horae contributing writer Ian Aldrich caught up with Zobel de Ayala to talk about the importance St. Paul’s School made in her life, how she has navigated her career, and what it means to help carry the mantle for such an esteemed family business.
How did your time at St. Paul’s School impact your career and leadership roles?
SPS was where I tested myself as a leader — as a prefect, on the MISH council, as a student admissions officer, as captain of the squash team. It was a safe space where I could experiment with managing teams and fellow students. That experience gave me the confidence to continue testing and growing my leadership skills.
You’re a member of the eighth generation of your family to helm the business. What does that mean to you?
It’s definitely a privilege, and one I don’t take lightly. I feel lucky to have had the example of many generations of visionary and hardworking family members, as well as the professionals and executives who have led the business forward. Perhaps an equal pressure to that of the weight of my family’s history is the talent and experience of the professionals and executives I have the opportunity to learn from and work with.
As a woman, what kind of challenges have you faced in the business world?
I’m lucky in that the Philippines has a history of many strong, influential, and respected women in both the public and private sectors, as well as in both large and small communities. That being said, I believe there is work to be done in continuing to even the playing field for men and women.
What’s at stake for getting that right?
The issue of equality is one of national importance. It is about building an empowered and productive workforce, to be able to maximize on the promise of the country as a whole.
In 2013, after a two-year stint with JP Morgan in New York, you returned home to work for the Ayala Corporation. Why was that important to you?
I felt the opportunity to contribute to the development of the Philippines and learn from the breadth of opportunity across Ayala was a unique combination. Had I stayed in financial services, it would have been more focused, but I wouldn’t have had the opportunity to learn about the intricacies of other industries, such as real estate, energy, telecommunications, and healthcare, and the impact and potential these industries have on the development of my home country.
Where do you see your career heading over the next decade or so?
I am really enjoying working for [Ayala’s] BPI Consumer Bank, where I get to wake up every day thinking about how to support the Filipino consumer in reaching his or her goals and aspirations, and how to excite them along the way. It is especially fun to sit in the crossroads of a business that is transitioning quickly into the digital world, and among a consumer base that is particularly open to that. I hope to continue adding value — and raising the standards — of the Filipino consumer across real estate, banking, and telecommunications.