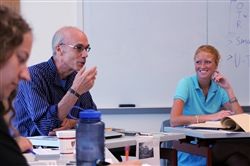 7/26/2013
Jana Brown
SPS alumnus has been teaching at ASP since 1981
Every year since 1936 there has been a member of the Schade family employed by St. Paul’s School in some capacity. For the last 32 years, Richard Schade ’62 has represented the family at the School, first for 16 years as a German teacher for the Advanced Studies Program and for the last 16 as the teacher of ASP’s The Quest.
When ASP graduates its 56th class on July 28, it will also close the chapter on Richard Schade’s time at St. Paul’s. The son of longtime languages faculty member Gerhard Schade (1936-71), Schade grew up at St. Paul’s and held a summer job handing out books and slide rules to the ASP’s first class in 1958. He went on to intern at ASP in the summer of 1967, while working on his master’s at the University of New Hampshire.
“That summer [of 1967] actually sealed the deal for me in terms of wanting to become a teacher,” says Schade, who continued his graduate work in German studies at Yale before moving on to the University of Cincinnati, where he has been a German Studies professor since 1975. “Over the years my interest in the ASP never subsided. My dad had taught German, so it was sort of part of the family.”
For decades, Schade has fielded many queries about his summers in New Hampshire from his colleagues at the University of Cincinnati.
“They always ask me, ‘Why do you go up to St. Paul’s School to teach during the summer? Don’t you get enough of it?’” he explains. And I say ‘no.’ I choose to recharge my batteries with the best and the brightest from the state of New Hampshire. And I sincerely mean that. These are absolutely incredible students. Even the ‘slowest’ student is articulate, always on the edge, pushing the envelope. I encourage that. I feel very proud that I have been able to contribute that to ASP and to the culture and educational mission of St. Paul’s School.”
Schade, whose wife Heike also taught German at ASP for 10 years, has taught The Quest for the last 16 years, with texts ranging from Faust to Steinbeck to Kerouac to Kingsolver. As a culminating event, the class climbs New Hampshire’s Mount Chocorua each summer, with students considering their own personal quests. Contemplating his final summer with ASP has put Schade in a similar mindset.
“I really wanted to go out on the top,” he says of his decision to retire in 2013. “I’m sure I have made a contribution to education in the state of New Hampshire. I do that altruistically, and I think my work here has come full circle. I have been on sort of a quest myself because I’m working with texts I don’t normally work with. So I think it’s the end of a long road – at one point or another, you might as well call it a day.”


Ashley Crutchfield ’08, was an intern under Schade in last summer’s Quest class, and says she learned an extraordinary amount by watching him each day.
“What really made him such an influential part of my ASP experience was his passion for the program,” she said. “He truly cared about his students and interns and gave 150 percent of his attention and commitment to bettering anything or anyone in the program every single day. He truly embodies the heart and soul of ASP.”
Schade says he will miss so many aspects of his summer life at St. Paul’s, but most of all he will miss the students who have kept him coming back for more than three decades.
“I will miss the students, no doubt about it,” he says. “I have come to know them in many different situations; in class, in moments of weakness, in moments of strength. I will miss the rhythm of the day – the Chapel services, the running on the track in the afternoon, the walks in the woods. And just being with these students."