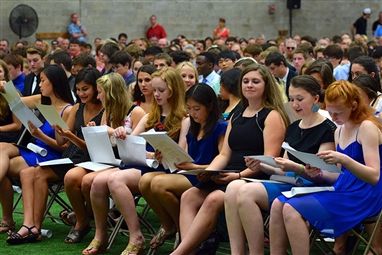 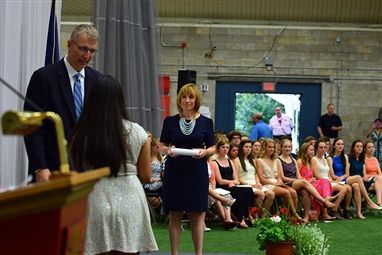 7/30/2014
Jana Brown
New Hampshire governor speaks to summer program students at graduation
“For 57 years now,” New Hampshire Governor Hassan said of the Advanced Studies Program, “you have enriched the lives of thousands of Granite Staters, preparing them for success in their senior year and beyond, with an environment that helps give students a taste of the academic and social experiences of college.”
The governor’s remarks came in the midst of the July 27 graduation honoring the 267 New Hampshire rising high school seniors who chose to spend nearly six weeks of their summer challenging themselves in the rigorous academic environment of ASP.
Students from 76 of New Hampshire’s 84 high schools arrived on the SPS campus on the afternoon of June 20, some fresh off exam weeks at their own schools. They chose from 19 course offerings, ranging from Biomedical Ethics to Engineering to Innovation in Action to Arabic to Marine Biology to Studio Arts, with their experiences rounded out by writing workshops, extracurricular activities, and residential life.
ASP Director Mike Ricard (SPS 1989) welcomed families and friends to the hour-long ceremony in the Matthes Cage. “All of you showed up on the afternoon of June 20 ready to take on the unknown,” he said. “Our goal was to introduce you to an educational environment that extends you beyond what you are used to.”
ASP was first conceived in the fall of 1956 when SPS Rector Matthew Warren formed an exploratory committee to discuss the possibility of offering a summer academic program on the St. Paul’s campus. The program now boasts more than 11,000 alumni.
In her remarks, Governor Hassan thanked the program and St. Paul’s School for making ASP possible and for “giving Granite State students this extraordinary experience.” The governor also told the graduating students that “as my own experiences taught me, it is important to remember that the path you end up on might be different than you first expected.”
“There is no formula, no predetermined set of steps that works for everyone, and you rarely end up where you originally thought you would be,” she said. “What you can be sure of is that your education has prepared you for any path you might take. I encourage all of you, no matter what your next step is, to seek ways to continue your education, to continue building and developing your skills. Because the payoff will not be limited to yourselves – it is also critical to the future of your communities, your state, and your nation.”
Ricard continued his remarks just ahead of diploma presentations, which were facilitated by Governor Hassan and by ASP Assistant Directors Matt Caputo, Ned Heckman, and Grace VanNoy.
“You should be proud,” Ricard said, “of what you have accomplished over the last 38 days.”