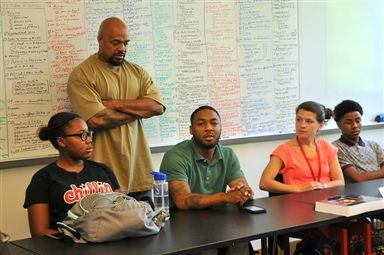 7/24/2015
Jana Brown
Leon Ford visits ASP's Changing the World class
On the night of November 12, 2012, 19-year-old Leon Ford Jr. was pulled over by police in Pittsburgh, Pa., on what appeared to be a routine traffic stop.
He was told he had run two stop signs, a claim he disputes and that has since been disproven. The incident ended with Ford, who was later cleared of any charges related to the stop, being shot five times. It left him fighting for his life, paralyzed from the waist down.
The police, Ford told students in Mike Stevens’s ASP Changing the World class, had mistaken him for another man – Lamont Ford, though the two bore little resemblance other than their similar names and the fact that both were black men. The night changed Ford forever, physically and emotionally. At the time of the shooting, Ford described himself as a typical teenager – he had a job painting cars, enjoyed hanging out with his diverse group of friends, and loved producing music videos. He had never been in trouble and was considered a “good kid” by those who knew him. He said he didn’t think racism existed or that the Civil Rights Movement had any relevance to his life. Until that changed.
“I never thought I’d be an activist,” he told the ASP students on July 21. “It was a struggle at first. I didn’t have the Trayvon Martin effect of rallying people, so I had to do my own organizing.”
Now 22, Ford has worked tirelessly to organize several “Justice for Leon” rallies since his first one drew several hundred supporters on March 8, 2014 in his home city of Pittsburgh. He is a leader in the #BlackLivesMatter movement, saying that he is determined to use his story to create positive change. Both Ford and his father, Leon Ford Sr., who accompanied him to Concord, spoke of the importance of law enforcement officers understanding the citizens with whom they interact and the neighborhoods they patrol. The have lobbied for change to policies that allow officers to live outside city limits. Leon Jr. spoke of how Pittsburgh has been more than once named the “most livable city” based on criteria that does not consider the poverty and lack of educational access facing a great number of its people. Before he was shot, Ford said, he was routinely pulled over by police, though he had and continues to maintain no criminal record.
Changing the World is all about the Civil Rights Movement and how it transformed the country. Students have studied not just the events and figures who defined the movement, but what caused it and, perhaps most importantly, why.
“It changes your point of view,” said Kim Salina I, a student from Pelham High School, “and makes you think about how you are going to make a difference.”
Ford’s visit, said Stevens, made an impact on his students. The young man told them, with a broad smile, that he hopes he can continue to bring people together, so no matter what race, gender, or religion, they see one another for who they are, not what labels define them.
“One of my mottos,” Ford said, “is ‘become your own hero.’ Sometimes if we want to change the world, we have to do that.”