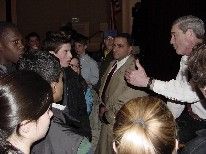 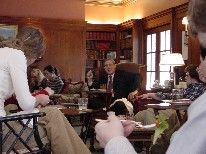 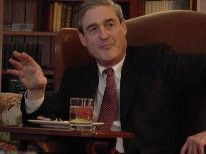 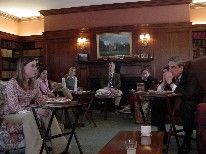 2/26/2004
Jana Brown
Dozens of St. Paul's School students gathered around the distinguished Conroy Visitor as he sat atop the steps of the Memorial Hall stage on Thursday afternoon.

Dozens of St. Paul's School students gathered around the distinguished Conroy Visitor as he sat atop the steps of the Memorial Hall stage on Thursday afternoon. Seeking one last opportunity to speak with FBI Director Robert S. Mueller '62, the students stretched their necks toward his voice, fascinated by what he had to say.

"It is an incredible experience to be able to hear the direct perspectives of the FBI Director," said Matthew Danzig '05. "It is an experience I don't think you'd have anywhere else. He was very kind and answered our questions very well. Seeing him as the head of the FBI, I trust the FBI further not to abuse their powers. It is a good perception."

Mr. Mueller spoke for 20 minutes before opening it up to the floor for questions. In his remarks to the community of St. Paul's, he recalled his affection for the School. "I would not be where I am today if not for the growth I gained at St. Paul's," he said.

Mr. Mueller went on to explain the structure of the FBI and to outline the Bureau's priorities. He told the attentive SPS students that the top priority for the FBI's 12,000 agents is preventing another tragedy like September 11. Mr. Mueller also referred to the types of crime that the FBI deals with, discussing cyber crime in specific depth and calling computer-based deviance "the crimes of the future." He concluded his remarks by explaining what it takes to be an FBI agent, highlighting judgment, morality, maturity and integrity.

In the 45 minutes that followed his remarks, Mr. Mueller fielded a constant flow of questions from the students and faculty of St. Paul's School. Topics included the relationship between the FBI and the Office of Homeland Security, how the FBI is dealing with potential terrorist threats inside the United States, whether or not the FBI plans to expand overseas, and how perceptions of the FBI can be improved. The students turned a great deal of their focus to the Patriot Act and issues of civil liberties.

"It is so incredible that we can actually talk to the head of the FBI because what we say could actually have an effect," said Kate Williams '04, who asked Mr. Mueller several questions related to civil liberties. "He could bring it up in a meeting and somebody might hear us. I know I will remember this for a long time."

Added Danzig, "The great thing was that we were able to take things we were learning in classes and connect with him and learn his perspective. We had a debate on Sunday on the Patriot Act, and to learn from the Director of the FBI his perspective on that topic was incredible."

Affable, engaging, and articulate, Mr. Mueller did his best to answer all questions posed to him. He did decline comment on issues related to partisan politics and specific intelligence. He also politely declined comment on Democratic presidential candidate and SPS Formmate Senator John F. Kerry '62, except to say that Senator Kerry "was a very good lacrosse player." Mueller and Kerry played ice hockey and lacrosse together during their time in Millville.

Prior to his speech in front of the larger SPS community in Memorial Hall, Mr. Mueller spoke candidly about leadership and his role with the FBI with a group of student and faculty leaders at a Rectory luncheon. However, the first question posed, courtesy of Josh Jersey '04, was what house he lived in while at St. Paul's. His answer provided a bit of insight into Mr. Mueller's life as an SPS student.

"I spent all my waking hours shooting pucks into the fireplaces in my dorm," he said with a laugh.

Mr. Mueller talked more seriously on the subject of leadership, referring to his experience as a Marine platoon commander in Vietnam as a shaping influence in his life.

"One of the best ways to gain leadership experience is through service," he told the group of approximately 30 students and faculty. "I am blessed and exceptionally fortunate to do what I love doing and that opportunity comes in the form of service."

Bishop Craig Anderson, Rector, welcomed Mr. Mueller home and spoke of the FBI Director's commitment to his country and to serving others, something the School has traditionally aimed to instill in its students.

"We hold up the relationship of leadership and service as being important and it's nice to have alumni who can come back and embody that in terms of what they are doing with their lives, their sense of commitment to their country, and how they have taken positions of responsibility and personal risk," said Bishop Anderson.. "To do what this man does at the level at which he does it is a demonstrable expression of the commitment he has to his country and to leadership through service."